Using Music in the Classroom

Instructor Magazine asked Barry to write an article on using music in the classroom. It was published in their March, 1994 issue. This is an expanded version of that article, which teachers can use as a resource for incorporating music and poetry with their students. 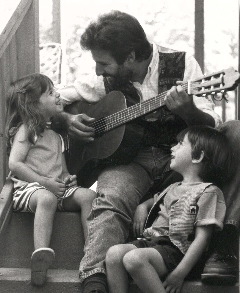 Children naturally respond to music. Young kids will hop, jump and wiggle when prompted by a good beat and older kids will listen to the words of a song to hear the story being told behind the rhythm and the sounds.

Teachers can tap into their students natural affinity for music and song and use it to help their students broaden skills in other related classroom activities from learning about other cultures and peoples–to exploring language arts and poetry. From songs, children can learn about rhythm and rhyme, but they can also learn about history and the world around them; what instruments are used in other cultures, what peoples of other nations write and sing about. Listening to song lyrics can also expand children’s vocabulary by exposing them to new words and ideas.

Using music in the classroom does not require any formal training and can be incorporated in other areas of study in several easy ways. Like a good poem, a good song works even if the listener doesn’t know what all the words mean or what instruments are being played. Music appeals to our imaginations; the sounds of words and music convey an image and a feeling and can paint a picture in one’s mind, exciting our own creativity.

Children in elementary grades are usually open-minded and should be exposed to as many different types of music as possible. One of my six-year old son’s favorite pieces of music is Orff’s Carmina Burana–a classical choral piece that swells with voices and an assortment of instruments. “It’s castle music,” my son exclaims and it sounds like the music from the era of Robin Hood and Excalibur; you can almost see mounted knights riding off in their suits of armor as the voices swell.

Teachers can use classical music in the classroom during a quiet moment with the aim of encouraging students to really listen–and let their thoughts and imaginations wander. A discussion of what the students thought about while the music played could be initiated; did they associate the sounds with something scary? Sad? Happy? Exciting? By talking about the “mood” of a piece of music, a teacher can introduce the idea that even music without words can tell a story. The idea here is to emphasize the idea that music, like a story, is dramatic; that sounds and pitches and rhythms all add to the mood and the texture of a piece–and contribute to the way a person feels about what they are listening to.

This activity can be carried further into a simple art session where kids could color pictures of what they imagined; another way of telling a story without words.

Teachers can also incorporate music into class sessions on history and social studies. There are songs about the Civil War, about coal mining; about everything from boat building to the Civil Rights movement. Using these songs in the classroom is a fun way to bring history alive through the music of a given time and place. Dolores Keane and John Faulkner, for example, have recorded a number of songs about the Irish immigrant experience in America at the turn of the century. Their songs address the many reasons why people were compelled to leave their country and the difficulties they encountered when they arrived in America. Although you can also find this material in a text book, the haunting vocals and Irish fiddle add a dimension to our understanding and emphasize their despair and frustration in a simple, direct and dramatic way.

Similarly, David Massengill, a folksinger from Bristol, Tennessee, has more than a few songs on his Coming Up For Air recording that might tie-in with units on social studies. My Name Joe is a haunting song about an South East Asian immigrant working in the kitchens of New York, and Number One In America is a beautiful song about the changes in the south from the time of the Freedom Riders to the present.

Jack Hardy, another folksinger, has a chilling song entitled “The Incident at Ebeneezer Creek” which describes a small but true story during the American Civil War, where slaves were abandoned to the Southern Cavalry by the Northern troops who had “liberated” them. The poignancy of the song is very effective and captures the emotions of the event in a dramatic way. Reading about the event as history is not nearly as effective as hearing the song.

Peter Rowan has a recording entitled Awake Me in the New World, which incorporates traditional acoustic instruments as well as Spanish, Native American and African instruments in songs about the New World. The songs on this recording can easily be incorporated into a unit on Columbus–and the events that came after him-with an accent on multi-cultural history. Sugar Cane and African Banjo, are especially noteworthy songs; the latter talks about the Banjo’s evolution from the African drum and is quite moving. It is a perfect example of the influences that people from other cultures and countries have had on our music–and our own American culture.

Popular music too, can be used to illustrate this concept. Paul Simon’s use of African and Brazilian drums on his recent Rhythm of the Saints, as well as his collaboration with South Africa’s Ladysmith/Black Mambazo and Cajun Zydeco rhythms on Graceland are two good recent examples of multi cultural musical styles. Rock music is also a great vehicle from which to explore the roots of music and how various cultures and musical styles can merge. Young fans of Led Zeppelin and Eric Clapton might be intrigued to hear the original blues versions of some of their songs recorded by Willie Dixon and Muddy Waters.

Teachers can use song lyrics as a fun way to introduce children to new words. By listening to songs, children can “learn” to be better listeners and to be more comfortable with language. The more one listens to words, the more one becomes accoustomed to the way that words work; how they sound, how they roll, how they create a rhythm and beat. Song lyrics illustrate the natural rhythms of language and can help introduce literary concepts of metaphor and simile. A good song, in other words, can be a direct link with poetry.

My own young children love animals and are always attracted to songs about them. Their current favorite is a song by Leo Kotke called Pepe Hush. None of us are exactly sure what action Kotke is describing in the song, but it’s clear that Pepe should not be hushed; he is telling his owners something important and we listen each time, trying to figure out the song. By listening intently, my kids are being exposed to new words and building their vocabulary.

Songs are often written about everyday life and can be a perfect springboard for kids to write about their own experiences. For years, I have been going into the schools as a visiting author and songwriter–talking and singing about all sorts of things that I have written from my own experience growing up in a family of six and now as a father of twins. My main emphasis to the students and teachers is that songs can be written about almost anything (If I can write a song about underwear and another about diaper rash, you really can write about just about anything.) Once you let your imagination go, there is a world filled with things to write and sing about.

In a recent Middle School workshop I gave, I encountered a group of “sophisticated” eighth graders who wanted to write about one students boyfriend. Another group, trying to be funny, suggested we write about ear wax. Their teacher was not amused and suggested they get serious. I suggested they combine both ideas and, with the consent of the student whose boyfriend we were about to write about, turned it into a song-poem called “Ernie’s Earwax,” using his ear wax as a metaphor for his soft and gentle personality. The kids were in stitches at the absurdity of the topic, but through the giggles, we ended up talking about alliteration, (Ernie’s ear wax), internal rhyme, the uses of metaphor, and the concept of re-writing and revising one’s work–something I do over and over and over again. By the end of the class, the students were suggesting images of a candle, which prompted a further discussion of metaphor as the image of wax in the ear became merged with the candle wax, standing as a symbol for romance, flame, warmth, heat-and, as one student suggested, love burning out.

By first thinking about something from their own experience and using their imaginations, kids often write some very funny and witty songs, poems and stories. Do you have some young writers who are puzzled about what to write about? Suggest the image of cafeteria food and see what happens. But be prepared for some unpleasant images and be careful not to censor their imaginations. Kids don’t think like adults and once they get excited, you may be surprised at what bubbles forth. But don’t worry-it’s called creativity.