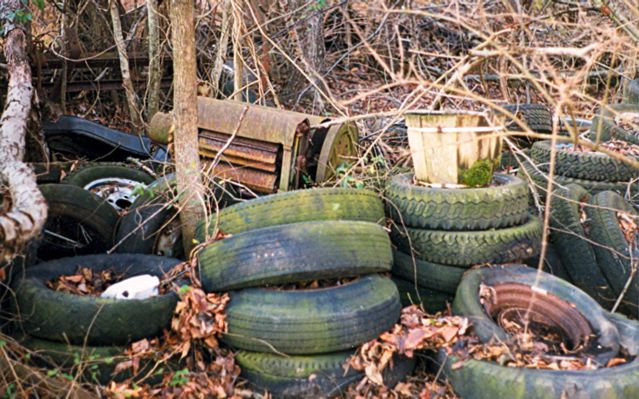 A couple years ago, we bought a large farm property that adjoins a huge wooded preserve surrounding the Patuxent river watershed — a beautiful place with hills and streams that is only five miles from where I have lived my entire adult life.

I was taking our daughter to a horse farm where she had been doing volunteer work all summer long. The job was over but she wanted to go back for one more day and see if they needed any more help when we saw a “for sale” sign on the property next door. We drove up the long winding driveway, went over two small bridges that crossed two forks of a stream and arrived to find a run-down house with overgrown gardens, fields and brush.

I came back for a closer inspection and realized how much work was needed to get it in shape. As I walked around the place, and took in the scope of the repairs, my realtor who had come with me this time looked at me as if I was crazy and asked, “Are you really considering this?” One of our friends came over to see the place and said, “Barry, you must have a vision that I can’t see.”

A lot of the plumbing in the house didn’t work, and there were countless repairs that needed to be done. The house, barns and grounds were all terribly run down and filled with all kinds of debris and junk. The roof leaked and there were snake skins in the kitchen cabinets and mouse droppings everywhere. But that made it affordable and we jumped in.

I filled my first 30 yard dumpster within 48 hours and filled the second one a few days later; old rusty fences, rotted wood piles, trash and debris in every corner of the house and from every spot on the property…… I pulled stuff into the dumpsters with ropes, moving even heavier objects with levers and getting the pick-up truck stuck in the mud more than once.

My new best friend became an older gentleman from the neighboring county who came almost every day with a pick-up truck more run down than mine, pulling a trailer; he’d fill up a load of scrap metal and sell it to the scrap yard, clearing the fields of car parts as he went. Together, we pulled out stacks of car hoods, transmissions, engines, metal pipes, old boilers, and oil tanks that had been dumped and buried all over the property. We also hauled away a dozen junked cars in the fields.

I worked almost every day for four months filling dumpsters, taking down rotted fencing, and cutting tree limbs. I lost twenty pounds getting rid of over 200 “spare” tires from the property.

The first winter snowfall was a few inches deep and I was happy to climb the steep driveway hill in our old four-wheel-drive jeep. The snow covered everything in a gorgeous white blanket and I spent an incredible week out at the property kicking the snow off a pile of debris under a collapsed shed and filling the dumpster in the absolute quiet and solitude. It was just me and the deer. At one point I walked over to the hillside overlooking the creeks and just stood motionless for a half hour taking in the sights.

Eventually, I became the junk metal man. The weather turned bad and there wasn’t enough high paying scrap metal to make his trip worthwhile so I began taking scrap metal to the metal yard myself, just to get the junk and debris off the property. I cleaned out the house, attic, basement and crawl spaces, and also emptied the two barns and the small shed of all its abandoned contents–more rusted metal and rotted wood. It was not the Aegean stables but it was overwhelming.

I took down the mildewed drywall and ripped off the stained avocado and gold wallpaper on every wall of the house. We replaced every single door in the house that had been chewed through by dogs. The heating system was broken and we replaced that, too.

I filled six dumpsters before tackling the last two dump sites–one was a huge pile of junked car parts, refrigerators, barbed wire, trees, paint cans, fencing, wood and building materials that were bulldozed into a deep ravine along the watershed. The other pile was an enormous mound of broken glass and rusted metal that was thrown into a pit about ten feet wide by thirty feet long…..I didn’t think the work would take so long or be so involved but every step I took led to a dozen more steps. Every time I dug something out of the hillside, something else would reveal itself. It was beginning to feel endless and I was overwhelmed, exhausted…and happy.

I filled my seventh dumpster that summer and my kids said dumpster loading had become my new sport; as we’d drive around town, if they spotted a dumpster parked by a construction site, they’d yell out, “Look Dad–a dumpster.” Then we’d all critique the way it was loaded (efficient and tightly packed or haphazardly overflowing).

For a while it was beginning to feel like working in the Gulag, digging out more old tires, rusty car parts and other debris from every corner of the property.

What was I doing cleaning up this ravine? Here I was down in a pit digging up someone else’s garbage. Was this a metaphor for something? Perhaps we should call the place “Back Acres”….a play on the back breaking work–and perfect because the place sits back from the road at the back end of the street and backs up to the watershed.

Eventually, I found less and less buried trash. But then the worst thing happened–on the way to the scrap metal yard with only a half a truck-load of rusty scrap metal I had collected, I stopped to get gas and saw a pile of metal car parts behind the gas station and asked the owner if he wanted it hauled away to the junk yard; I was going there anyway.

I was now taking other people’s scrap metal!

The kids would shake their heads and duck down when they saw me driving around in my dented and battered old pick-up truck with the broken front windshield and the piece of plexiglass taped to the back window because I just couldn’t bear to call the insurance company again to tell them that, while loading junk and debris, I had knocked out the window of the truck for the second time in six months!

Well, at least I hadn’t started wearing the overalls yet.