Stanley Stole My Shoelace and Rubbed It in His Armpit

and Other Songs My Parents Won’t Let Me Sing 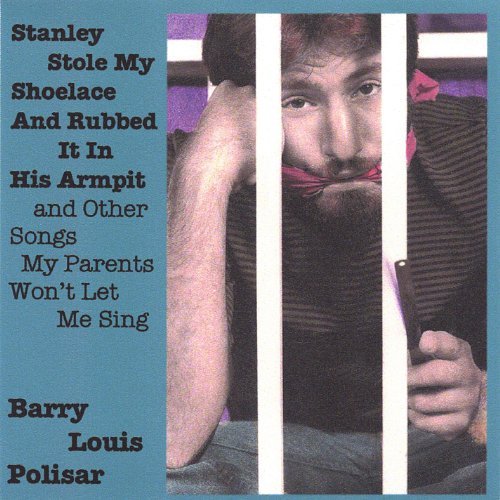 Barry was well on his way to revolutionizing children’s music with this 1981 recording as the cover pictured Barry imprisoned in a playpen with his mouth gagged as he is shown trying to hacksaw his way out.

Read a review of this album here

the sound: Stanley Stole My Shoelace is an album of catchy children’s songs you can still get behind. Think of it as “Anarchy in the Pre-K.” The only instrument featured on this album is an acoustic guitar. But, because it’s a children’s album, it’s really more about the words than the music. Polisar has a strong voice with a slightly nerdy timbre, and he uses it not only for lead vocals, but also to provide “backup singers,” who sound like a chorus of crazy housecats. He also changes his voice, a la “Peanuts,” to sound severe or admonishing when singing the part of grownups. It makes them sound dopey, which works, because, as all kids know, grownups are stoopid.

the background: Polisar’s genius lies in the fact that he composes songs about what kids truly want to hear. Kids often really do hate the new baby in the house and worry that their teachers don’t like them. Polisar captures that angst without any of the ridiculous mushiness that usually accompanies it. Screw getting along with your siblings or eating your vegetables. In Go and Hush the Baby, a boy loses his sister down the drain. In another tune, Polisar offers several tidbits of dining advice: “Don’t eat your food that is sitting in your plate / but smear it in your ear and smush it in your face / mash your mashed potatoes and stuff ’em down your pants / take potato chips and throw ’em at your aunts.” Of course, if you take this advice, he warns, your parents will hit you. Oh, yes, beat you, even. Stanley Stole My Shoelace is full of scary grownups, yelling at kids and locking them in closets. Polisar also sings about eating disorders, neglect and inappropriate touching. This may explain why Raffi albums charted while Polisar’s records were relegated to the back of the album bins at the library. Parents can’t handle the truth.

the significance: There may be a good reason why Polisar appears to be behind bars on the cover. Stanley Stole My Shoelace includes such songs as Inequality Makes the World Go Round, I’m Standing Naked On the Kitchen Table (Trying to Get Your Attention) and Get Your Finger Off My Leg and Your Hand Off of My Shoe. In one of his songs, he even uses the word “nipple.” If released today, the album would likely produce a thunderstorm of controversy, with people up in arms about political correctness and sending kids the wrong messages. But that’s just because Polisar sings the truth. “I love my daddy / though he always yells at me” and “You said that I’m a bad boy / you said that I’m no good” are lines that many kids actually hear and experience, as opposed to dancing ocean life. Polisar sings it all in a way that lets kids know that it’s all right to feel that way. If you think you’ve heard the name Barry Louis Polisar recently, it’s because his song All I Want Is You is played over the opening credits of Juno as Ellen Page walks to the store. In retrospect, Polisar’s earlier works now sound more like Moldy Peaches songs than children’s music. Polisar still continues to make albums, although they’re much tamer than his earlier work. For creating those old albums, he deserves an award. A Golden Lawn Dart, perhaps.