Old McDonald Had a Farm (revisited) 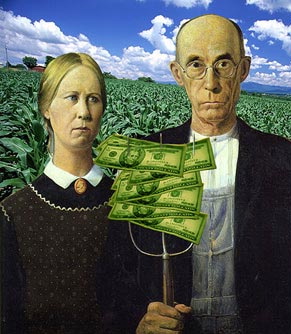 Gene Weingarten, The Washington Post’s humor columnist, challenged Barry to a children’s songwriting contest and then published the song lyrics in his column.

The original topic he picked was to write a children’s song using the tune of Old McDonald Had a Farm that would be “an examination of the ethics of zoning laws; to wit, whether abridging the rights of property owners is justified by an over-arching need to maintain prudent community standards and provide a strong revenue stream of tax dollars.”

The County needed revenue
The school house was in need
A farmer can’t be taxed too high
If he’s going to suceeed
So there’s a Quick-Mart here,
and a K-Mart there
Fast-mart, Pets-Mart everywhere a Wal-Mart
Old McDonald had a farm
But they would not let him stay

They changed the zoning on his farm,
Said the County had to grow;
Then used their imminent domain
To make that farmer go
With a highway here,
and a highway there
There’s too much traffic everywhere
Old McDonald had a farm,
But they would not let him stay

Old McDonald Had a Farm © by Barry Louis Polisar