The Ten O’Clock
Alarm Clock That Would Not Stop

Barry Louis Polisar, age 8
and saved by his Mommy 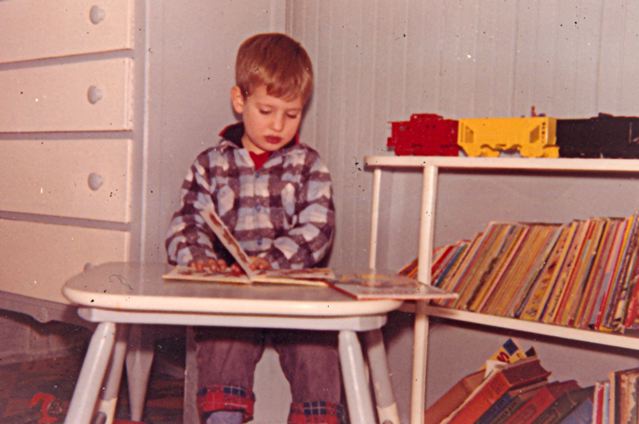 There once lived a man and a clock. The man was mad about his clock. Every time he set it for nine o’clock, it rang at ten. Everyday, he was late for work. Of course you probably know, he got fired. Everybody knew that his alarm clock was to blame except for his boss.

Each day, the man would look in the paper for a new clock. He never found any. He even went to Joe’s Fix-a-clock shop, but they couldn’t fix it.

Every time the man got a new job, he would oversleep and he was fired again and again. You can just imagine how mad this made him feel. He wished that he could be like all his neighbors who had clocks who always did what they were told.

One day, he went into a restaurant and sat down at the counter. He ordered some food and started to read the morning paper. Before his breakfast was served, he put on his napkin and opened up his paper and saw an ad for a clock that he wanted to buy. He was happy. He ran out of the restaurant, napkin and all. Everybody laughed to see such a funny sight!

He immediately headed for the Tick-Tock Alarm Clock Shop. When he arrived there, the salesman started to laugh when he saw the man’s napkin still attached to his shirt.

The man bought the clock that was advertised in the newspaper and took off for home. He was very happy indeed. “I will never be late for work again,” he said.

The Ten O’clock Alarm Clock was very sad and when he saw the bright new shinny alarm clock, he felt sure that the man would throw him out the next day. He cried and he cried and he cried. His tears flooded the whole bedroom. Now he would surely end up in the garbage.

Sure enough, the next day the alarm clock went off.

But much to the man’s horror, he discovered that it was eleven o’clock instead of nine o’clock and he was two hours late for work instead of just one.

Don’t feel too bad. Although the man was always late for his job from that day on, there is a happy ending to the story. The man decided to keep both of his clocks.

And the two clocks got married!

As time went by, the two alarm clocks had children who all lived happily ever after, ticking and tocking away. The man forgot all his troubles because he had such a nice big happy family.