Telling My Story:
Why this Haggadah is Different Than All Others 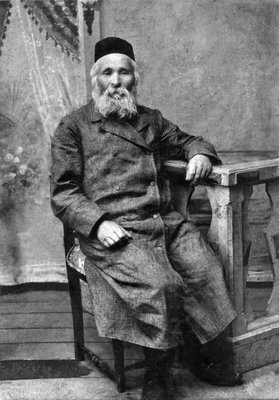 I never expected to adapt and publish a Haggadah. I was raised in an extremely secular Jewish environment and received a “Tijuana bar mitzvah” in the late 1960s; a crash course of bible stories and Hebrew lessons to prepare me for a ceremony that felt irrelevant at the time. My family considered themselves Jewish, but did not embrace any organized religious practice.

My Great Grandfather –a rebel in his day–had a lovely story he would tell about God giving the Jewish people religion and my Grandmother passed that story down to me and I included it in the introduction of my Haggadah. Much like Hillel’s famous story about how to boil down the essence of Judaism in one sentence, my Great Grandfather Louis’ story attempted to strip away the rules and restrictions of Judaism, and embrace the heart of Jewish practice. “What’s all this?” God asks when the Jewish people return the religion to Him because it is too hard to follow, “I just gave you ten simple commandments.”

It is a great story and one I still hold close to my heart, but I recognize that a casual reading of that story could easily be used to abandon the very rituals and practices that have allowed Judaism to survive through the years.

In my family, each of the generations that came after my Great-Grandparents lost a little more knowledge and tradition; although my Grandparents were Jewish to the core, they didn’t attend services or celebrate Jewish holidays. I have no memories of any family Seders growing up; we just did not have them.

In College I had the chance to read many Yiddish and American Jewish writers. Ironically, my gateway to Judaism was nourished by Jewish writers who were rebelling against the orthodoxy of their religion and embracing secularism, but their writings reflected their Jewish souls, no matter how much they tried to distance themselves from their background.

Knowing that there have been many attempts to eradicate Jews throughout the ages, I soon realized that I was part of a generation that had the potential to end Judaism; not through bullets or gas chambers, but by being the last link in a long chain. Being Jewish had to be more than an accident of birth. I had a responsibility to make a conscious effort to go back and discover what I had missed.

Among our family and friends, “Telling the Story” has served as a nice introduction to the Passover holiday. Although it is a published book that people can purchase, I make it available for free on my web site as a pdf that anyone can read, print, and use for free. I am gratified that many synagogues and College Hillels use it every year.

Though “Telling the Story” does not appear to be a traditional Haggadah at first glance, it does go through all the ritual steps and was designed to be an entryway for those who have moved away from Jewish tradition–or never knew much to begin with.

It’s not a five-minute seder and I have tried to embrace the spiritual essence of the holiday with thoughtful explanations.

After I met my wife, we’d gather at my in-laws and use their Haggadahs; I’d be surprised at how disconnected everyone was by the English text (few could read Hebrew, but even the English translations left many confused and disengaged). I first compiled and printed out a Haggadah that I culled from many sources and added explanations to help answer some of the questions that were often heard at these Seders.

Friends began telling me they were using my printed pages at subsequent seders they attended, and eventually, I decided to have my adaptation printed, using some of my daughter’s artwork as illustrations.

In recent years, we’ve held large holiday meals for Rosh Hoshana and Passover at our home and often have two to three dozen people crowded around 4-5 tables that stretch from one end of our dining room into our kitchen. It’s noisy and chaotic and every year, my wife and I wonder where everyone will sit and question if it will it be meaningful to everyone…but every year, we have a full house.

This seems to show there is a desire for Jewish spiritual identity outside the traditional box and I am thankful that my work may help people connect in some small way.