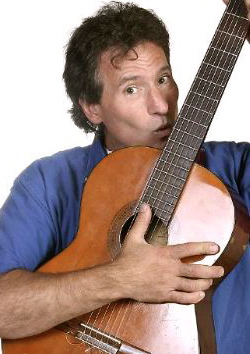 If that folk song playing under the opening credits of the quirky new Oscar-buzz comedy “Juno” vaguely rings a bell — well, you’re under 40, right? And you probably first heard it at a school assembly or children’s library hour or maybe on your own Fisher-Price record player.

“All I Want Is You” was recorded in 1977 by Barry Louis Polisar, a pioneer in the now-exploding kiddie music field. Not exactly a chart-topper. How did he end up on this year’s most anticipated hipster-rock soundtrack alongside the Moldy Peaches, Cat Power and Belle & Sebastian? “Purely by accident,” Polisar told us. He said director Jason Reitman was looking around on the Internet for a song of a similar name, stumbled upon the track from Polisar’s second album, “My Brother Thinks He’s a Banana and Other Provocative Songs for Children,” and fell for it.

“I get a modest sum,” said Polisar, 53, the father of 20-year-old twins. “And I get street credibility.” The up-tempo harmonica-and-guitar ballad “All I Want Is You,” with the words, “If I were a flower growing wild and free/All I’d want is you to be my sweet honeybee,” is more love song than nursery ditty, but then Polisar’s vision of children’s music was always different. His subversive songs about nose-picking and throwing up got him briefly banned by Anne Arundel County schools in the early ’90s, around the time he was gigging at the White House Easter Egg Roll and hosting a local kids’ TV show, “Field Trip.” Still, Polisar was ahead of his time–never got to sell out arenas like the Wiggles or Hannah Montana–so he’s enjoying the sweet vindication of being rediscovered via the Internet. Teva, the sandal company, used his song “Water” for a TV ad, and L.A. costume punks Radioactive Chicken Heads did a raucous cover of his “I Looked Into the Mirror, What Did the Mirror Say?”

“All these folks who grew up on my songs are now in rock bands,” he laughed. “There’s talk of a tribute album.” .